Not since the late 1990s has there been such a political illusion as we are currently witnessing!

During President Bill Clinton’s Presidency they came up with ways to balance the Federal budget.  I believe a large part of this was allowing individuals to move their IRA accounts into Roth IRA accounts.

A little back ground is needed here:

During President Clinton’s Presidency they allowed individuals to switch from their individual IRA accounts to new Roth IRA accounts during 1 year, but pay taxes on the money transferred into the Roth IRA account over a 5 year period of time.  There were a large number of very wealthy individuals who took the government up on this and many of which no longer pay taxes.

President Obama tried something like this a few years back, but only allowed the taxes to be paid over a 2 year period of time and few people found this tempting.

Fast forward to today and the fiscal cliff:

The threat of much higher individual taxes, capital gains taxes, AMT taxes and dividend taxes on people who have incomes above $250,000 a year has put America’s wealthiest citizens into a panic. They have:

All this is going on as the President, Congress and the Senate appear to be fighting like little children; each wanting to get their way, or they will take their toys and go home.  Or are they really?

Let’s take a step back and look at this.  There have been so many people selling investments and companies declaring larger than normal dividends before the end of the year, to avoid higher taxes in the future, that the taxes that will be collected for the year 2012 tax year should jump up substantially!

If I were the President, Congress and Senate I would not want to settle the budget and tax issues by the end of the year.  I would want just what is going on right now. I would want to have the wealthiest American’s panicked even more, selling more and more of their investments to avoid higher future taxes that may or may not actually happen and/or last.  It helps Washington to reduce the budget deficit. In the long run it might even make all those people in Washington look smarter than they actually are?
Posted by Ted Feight, CFP® at 2:30 PM No comments:

Why All The Special Dividends

One of the oddest things to come out of the Fiscal Cliff headlines is the sudden proliferation of so-called "special" dividends. According to a recent article in the Wall Street Journal and another in CBS News, 349 publicly-traded companies have already moved up the date that they are paying their dividends or are paying additional dividends to shareholders, above what they would normally pay.

What makes these dividends so special? Technically speaking, the owners of the shares of a publicly-traded company are, collectively, the owners of that company. You can think of "ordinary" dividends as the money that the company has decided to return to its owners from the profits of its business operations. Each year, the company's management and board of directors decides all over again how much of its profits to distribute; it can increase, decrease or maintain its dividend payout, and even pay out more than its earnings. And, of course, many companies pay no dividends at all; they reinvest their profits in their enterprise or other business activities in hopes of generating more profits and making their company (and stock) more valuable, or they buy back shares of company stock.

These dividends receive special tax treatment under current law; the money is taxed at a maximum 15%--0% for people who fall below the 25% income tax rate. But that special rate will expire at the end of the year, resulting in a maximum rate of 39.6%, as dividends are taxed as ordinary income, and the ordinary income rates rise. Of course, the Fiscal Cliff negotiations in Washington could result in an extension of current rates; the truth is that nobody knows, at this point, what is going to happen with next year's tax rates.

Special dividends are simply a company's decision to pay its shareholders before rather than after the dividend tax rates are expected to go up.

They fall into two categories. In one category, you have companies like Johnson Controls (a technology company) and Bon-Ton Stores (fashion apparel) that are paying their normal dividends early. Instead of paying out their dividend as scheduled in, say, January, they will pay it instead in December as a convenience to shareholders. Other companies, like Oracle, have gone a step further, and announced that they will bundle several future dividend payments into one bigger pre-December 31 payment. Oracle will pay 18 cents per share in December to replace the dividends it would have paid out over the next three quarters.

In the other category, you have companies like Costco, Carnival (the cruise line company) and Brown-Forman (a wine and spirits distributor) that are actually borrowing money in order to pay a big dividend before the end of the year, on the theory that they are paying future earnings to shareholders at current tax rates, rather than at higher tax rates down the road.

The implication of some the news reports is that this is a special opportunity, where an astute investor can buy companies that will pay out a hefty dividend. But in fact, this is almost certainly the wrong strategy. Companies that are going into debt to make dividend payments are robbing Peter to pay Paul. To make a special $7 dividend, Costco will borrow $3.5 billion, tripling its long-term debt and has already caused the Fitch rating service to downgrade the company/s bond rating.

And some of these special dividends seem to be driven more by the interests of insiders than a convenience to the outside shareholders. The board of directors of Opt-Sciences, a company that makes special coatings for glass used in cockpits, has announced a special dividend amounting to 65 cents a share, in order, the company said, "to secure for the shareholders the benefits of the soon to be expiring current dividend tax treatment." A nice gesture? It would seem so until you are told that the family of one director, Arthur Kania, controls nearly 66% of the company stock. He may be more concerned about HIS tax bill than yours. 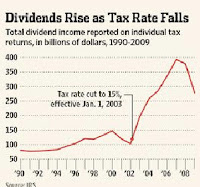 Another problem with these special dividend strategies is that higher taxes are not inevitable. And even if Congress takes us over the fiscal cliff, or if part of the next Grand Bargain is to eliminate special treatment of dividends, it won't be the end of the world--or even the end of tax-efficient ways to reward shareholders. As you can see from this chart, companies shifted strategies dramatically toward dividends precisely when the new lower tax rate was enacted back at the start of 2003. Before that, and perhaps in the future, those same companies will redirect the same money they have been paying in dividends into the repurchase of company stock, raising the value of the shares owned by their investors, or reinvesting the money, raising the value of their enterprises and thereby (again) increasing the value of their stock.
Both options would reward shareholders without forcing them to pay immediate taxes on the amount of the reward--a more tax-efficient strategy that some "special" dividend payers might consider before they go into debt to create a tax liability for their shareholders.
Posted by Ted Feight, CFP® at 12:48 PM No comments: