Most of us watched news coverage of the multiple terrorist acts against the city of Paris, France, with a mixture of horror and dread.  The horror was our usual response to terrorism, the feeling that arises when we ask ourselves: how can people think this way?  And when we realize that, somehow, there ARE people who think that way, which is so far from our own reality that the realization triggers deep emotions somewhere far on the opposite end of the spectrum from inspirational.

The dread, of course, comes from the realization that these attacks could have, and might still, happen here—that is, wherever we happen to be sitting, whatever concert venue or restaurant we might be planning to visit. 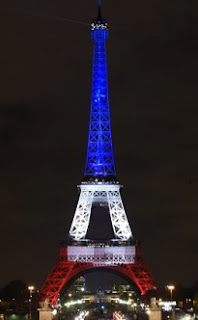 Hard on these emotions comes outrage, and that helps illustrate something that is seldom realized about terrorism.  In a recently published book entitled The Better Angels of Our Nature, author Steven Pinker points out that terrorism is far from a new phenomenon.  After the Roman conquest, resistance fighters in Judea—who called themselves zealots—would stab unguarded Roman officials whenever the opportunity arose.  In the 11th century, Shia muslims launched furtive assassinations on officials who practiced a different version of their belief system.  For 200 years, a cult in India strangled tens of thousands of people traveling through their country.  The assassination of President William McKinley was executed by a particularly ugly breed of of terrorist known at the time as anarchists.  Most of us remember days when London and Belfast were routinely rocked by Irish Republican Army terror strikes, and in the U.S., the Weather Underground of the 1960s had a terrible habit of setting off explosives in public places.

The book lists many other instances of terrorist organizations, but all of them prove a point: eventually, each of these groups will go too far, provoke the consciousness of the general public in the wrong way, and turn sympathy to their cause into outrage.  Pinker cites statistics that show that virtually zero terrorist organizations ever accomplish their aims, and they tend to die out after their most visible credibility-destroying “success.”  One has only to think of the fate of Al Qaeda after 9/11 as an example of a terrorist organization whose relevance declined to near zero in the messy aftermath.

No doubt, the ISIS leaders who planned the attacks on Paris believed that this bloodletting would cause all Western nations to recoil in fear, and back off of their military efforts to contain the new caliphate to placate the caliphate so it wouldn’t strike again.  You and I know that this is pure nonsense.  The inevitable outcome will be a new resolve, a hardening, a coming-together of the Western nations in a display of solidarity with France.  Countries that were inclined not to get involved in the Middle Eastern messiness are now motivated to sign on for an international military campaign that will contain and perhaps completely destroy ISIS.  Leaders who feared that their citizens would revolt at the thought of military intervention can now count on the support of their outraged voters.  The next year or two will almost certainly reveal the ISIS attacks on Paris to have been a fatal mistake for those who dream of an Islamic, Sharia-governed caliphate in Syria and Iraq.

Today, you will see the world’s investment markets open lower, and probably close lower, as the horror of the events in Paris are translated into uncertainty about the world we live in—and, therefore, the safety of our assets, reflected in our stocks.  The markets always respond reflexively and negatively to threats to our safety.

But as the year proceeds through its last few weeks, the smart money always tells us that these downturns are temporary.  Fears that global enterprises are somehow worth less because blood was spilled overseas will prove to be overblown.  More importantly, after the events in Paris, the object of our horror and fear—the terrorist organization known as ISIS—is about to confront an opponent more powerful than its leaders have the ability to imagine: the resolve of the Western nations.  At the same time, it will have to endure the disgust and repudiation of moderate members of the muslim faith, in the Middle East and elsewhere.

The world changed over the weekend, but not in a way that affects the value of your investments.  The change will be felt most powerfully in the failed dreams of a caliphate whose leaders have made a grave and awful miscalculation, who are destined to pay dearly for their malicious stupidity.
Posted by Ted Feight, CFP® at 3:15 PM No comments:

Do you want to get the most out of your Social Security? Do this before May 2016!


On the surface, it seems too good to be true.  You have a married couple, where (let’s say) the husband has earned higher yearly income than his wife.  That means he has contributed more to Social Security over his working life.  The husband files for Social Security benefits at full retirement age (currently age 66) and then immediately files to suspend those benefits. 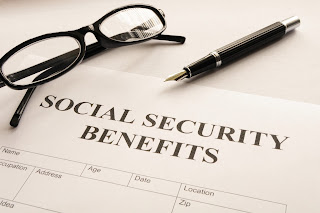 As a result of this simple maneuver, the wife is now entitled to immediately receive Social Security spousal benefits equal to half of the husband’s full retirement benefits that were just suspended.  She would do this if 50% of the husband’s benefit is higher than she would have received if she had simply claimed her own Social Security payments.

Because he suspended his benefits, the husband can continue working, and wait until age 70 to start receiving Social Security checks in his own name.  Why would he do that?  Because each year of deferral allows him to accumulate more credits—effectively raising his monthly benefits 8% a year, which is considerably higher than the inflation rate.  At that time, the wife would stop claiming the husband’s benefits and start receiving her own Social Security checks.  If she was working at the time, she might have raised the amount she could claim under her own name.

This popular Social Security claiming strategy is called “file and suspend,” and by this time next May, it may no longer be an option for retirees.  The Bipartisan Budget Act of 2015 that recently passed the House of Representatives would close what lawmakers are calling the “file and suspend” loophole six months after the President signs it into law.  You can expect that eligible seniors will be knocking on the doors of their Social Security offices before that deadline.  Meanwhile, those who have already filed and suspended will be allowed to continue as before.

The original rationale behind the file and suspend strategy was to encourage more seniors to continue working.  The rationale behind ending it is that it was becoming a drain on the Social Security system.  Moreover, Congress was looking for money to offset a huge increase in Medicare Part B premiums for individuals not yet receiving Social Security payments.  The provision is likely to pass the Senate, and could be the opening gambit of a broader discussion about how to “fix” Social Security’s messy finances.
Posted by Ted Feight, CFP® at 12:19 PM No comments: