The economic news that everybody is talking about lately is the sudden unexpected drop in oil prices.  One type of oil, West Texas Intermediate crude, has fallen from over $140 a barrel in the Summer of 2008, and $115 a barrel as recently as June, down to $91, and there is no sign that the decline will stop there. 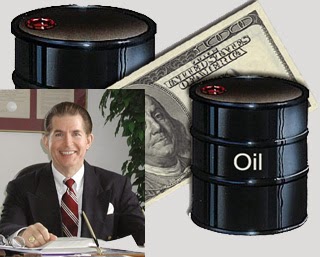 The price drop seems to be the result of a perfect storm of factors, both on the supply and demand side.  On the supply side, U.S. production has risen to the point where only Saudi Arabia extracts more oil from its soil.  In the recent past, America’s additional production was offset by sharp declines in production caused by the civil war in Libya, plus production declines in Iraq, Nigeria and the Sudan.  Those countries are now back in business, adding the production equivalent of 3 million barrels a day, a significant fraction of the 75 million barrels a day of global production.

On the demand side, meanwhile, China’s growth has fallen by half, European economies are weakening, and people everywhere are driving more fuel-efficient cars and living in more energy-efficient homes.

As always, a major shift in global economics is producing some winners and losers.  American consumers are among the most prominent winners, since they consume more oil and gas per capita than the citizens of any other country.  The stiff drop in oil prices this year has resulted in U.S. gasoline prices falling 26¢ to an average of $2.88 per gallon, down from $3.14 a month ago. That’s equivalent to a $40-billion tax cut that will benefit various the transportation sector, energy-dependent manufacturers and, of course, the handful of Americans who drive automobiles.

Lower energy prices are also a boon for countries that import a significant amount of crude, including India, which brings in roughly 85% of its oil, and Japan, which is importing oil again now that its nuclear reactor industry is on hiatus.

Losers?  You can expect the major oil companies to report lower profits in the months ahead, and the Russian economy which is heavily dependent on energy exports and already feeling the impact of an impending recession, is being crushed.  Surprisingly, some believe the biggest loser is Iran, whose social program spending and high costs of extraction imply a break-even well above today’s prices, estimated as high as $130 a barrel. 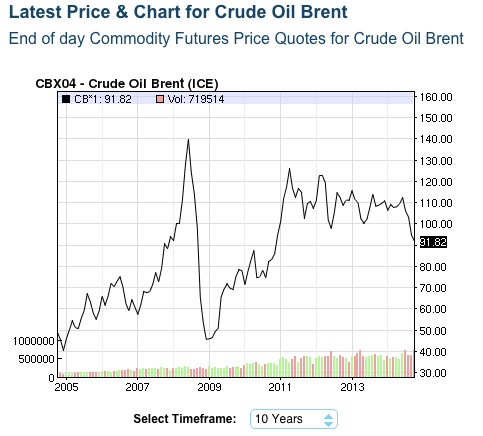 As mentioned earlier, oil prices could—and probably will—drop further.  But don’t believe the predictions that have popped up in the newspapers and on the financial TV stations of a new era of oil abundance.  Oil prices almost certainly won’t fall to pre-2007 prices, which can be seen on the accompanying chart.  Why?  According to the International Energy Agency, the capital cost of producing a unit of energy—that is, the cost of finding oil and gas, drilling for it (and hiring the people who will do these things, who are some of the best-paid workers in the world), moving it from the well to the refinery and refining it have doubled since 2000, and the rise in these costs increases yearly.  If oil prices drop much further, shale oil producers in North Dakota and Texas will find it unprofitable to keep drilling.

Another floor under prices is the OPEC cartel, which together supplies about 40 percent of the world’s oil.  A Bloomberg report noted that OPEC nations—particularly Saudi Arabia—have been surprisingly relaxed about the supply/demand shifts.  The cartel nations pumped 30.97 million barrels a day in October, exceeding their collective output target of 30 million barrels for a fifth straight month.  However, if oil prices were to dip closer to $80 a barrel, the cartel could well turn down the spigot and change the equation back in favor of higher prices.

What should you do about all this?  Enjoy!  When was the last time you saw prices fall dramatically on an item that you use every day, that you could hardly function without?  Chances are, you’ve been whacked by higher gas prices a few times in your life; this is your chance to enjoy a different dynamic—while it lasts.

Oh…  And don’t spend a lot of time worrying about the big oil companies.  Somehow they’ll manage to muddle through and stay profitable long enough to reap big gains the next time prices jump in the opposite direction.
Posted by Ted Feight, CFP® at 10:45 AM